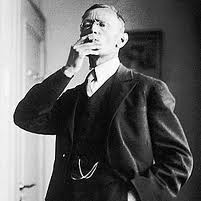 One who wears the sign might justly be considered odd, wired, eccentric, crazy, and dangerous by the world, for he is totally different from others. He is striving for who he truly is, realizing his inner call, and following his own unique destiny relentlessly, while the majority of people are striving for being like everyone else and cultivating the herd instinct. He has to endure unbearable loneliness during his quest, but loneliness gradually fades out; he will notice that many seekers are striving for their own destiny all over the world. He will share his experiences with other seekers gratefully like people who have tasted complete loneliness.  He will start to understand inner secret satisfaction and understand his task that he has to cultivate his individuality. Hess passionately preached the individualism of future:

From this day on I went in and out of the house like a son or brother – but also as someone in love.  As soon as I opened the gate, as soon as I caught sight of the tall trees in the garden, I felt happy and rich. Outside was reality: streets and houses, people and institutions, libraries and lecture halls – but here inside was love; here lived the legend and the dream. And yet we lived in no way cut off from the outside world; in our thoughts and conversations we often lived in the midst of it, only on an entirely different plane. We were not separated from the majority of men by a boundary but simply by another mode of vision. Our task was to represent an island in the world, a prototype perhaps, or at least a prospect of a different way of life. I, who had been isolated for so long, learned about the companionship which is possible between people who have tasted complete loneliness. I never again hankered after the tables of the fortunate and the feasts of the blessed. Never again did envy or nostalgia overcome me when I witnessed the collective pleasure of others. And gradually I was initiated into the secret of those who wear the sign in their faces.

We who wore the sign might justly be considered “odd” by the world; yes, even crazy, and dangerous. We were aware or in the process of becoming aware and our striving was directed toward achieving a more and more complete state of awareness while the striving of the others was a quest aimed at binding their opinions, ideals, duties, their lives and fortunes more and more closely to those of the herd. There, too, was striving, there, too, were power and greatness. But whereas we, who were marked, believed that we represented the will of Nature to something to perpetuate the status quo. Humanity – which they loved as we did – was for them something complete that must be maintained and protected. For us, humanity was a distant goal toward which all men were moving, whose image no one knew, whose laws were nowhere written down.